We were unable to meet in January, but a lot of our members were able to make progress on some great projects!

Our next club meeting will be on Saturday, February 27. Happy Modeling!

From IPMS USA –
“In light of the current pandemic situation, please be aware that neither IPMS/USA nor its Chapters are liable for any potential transmission of illnesses. Those planning to attend this event should (a) follow existing safe social distancing recommendations and (b) abide by any local or state regulations regarding gatherings.”

We had some great projects in the works in December.

Here are some of the projects people worked on during November

Bob Ekstrom built this 1/48 HobbyBoss A-10 Warthog with D-Day invasion stripes, which flew last year for the 75th anniversary of the landings:

Ethan Idenmill continued to work on his Bandai 1/1000 Space Battleship Aldebaran from the Yamato 2202 series:


The December Meeting is Cancelled

Due to the increased COVID-related restrictions in San Diego County, the December meeting is cancelled.

The status of the January meeting will be announced at a later date.

The November Meeting is Cancelled

Due to the increased COVID-related restrictions in San Diego County, the November meeting is cancelled.

The status of the December meeting will be announced at a later date.

We will meet again on Saturday, November 28 at 1PM. Please check the calendar for details. The theme for the next meeting will be – “The Model with the Most Aftermarket Parts”.

Here are some of the projects folks were working on during October:

Sebastian Malinowski built this Revell 1/144 F-14A in an unusual paint-scheme:

Lots of folks made good progress on their projects in September

We had a great informal and socially distanced meeting on Saturday, September 26 at the San Diego Air and Space Museum Annex.

We had lots of great models brought for show and tell. The theme was “what subject do you have the most kits of?” Scott Pence had the most with well over 30 kits of Sherman tanks. 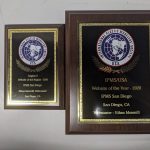