Our November, 2021 meeting was held on Saturday, the 20th at 1PM at the San Diego Air and Space Museum Annex in El Cajon. The theme was “your most expensive model”. Thanks to Christopher Jonas for taking pictures.

We had lots of projects in the works in October.

Our October meeting was held on Saturday, the 30th at the San Diego Air and Space Annex in Santee. The theme was “Your oldest shelf-queen”. We had lots models brought in. Pictures are below.

Our November meeting will be held one week early, on Saturday, the 20th at 1PM at the same location (335 Kenney Street, Santee). The theme will be “Your most expensive model.”

We had lots of great projects starting, continuing and completed in September.

Hossam Ali built this paper model of an F-15C.

We held our September meeting and annual (late) summer pizza party on Saturday, September 25 starting at noon. Folks brought lots of great models. The theme was “your most disappointing model”. Pictures are below.

Our next meeting will be held on Saturday, October 30 at 1PM at the Gillespie Field annex of the San Diego Air and Space Museum. The theme will be “a model you started but never finished”.

We had a lot of great projects in the works in August.

Model Swap Meet and Seminars – Saturday, November 13 – “Get your face out of that flat screen!”

On Saturday, November 13, IPMS San Diego will host at the Gillespie Field Annex of the San Diego Air and Space Museum a model swap meet and series of seminars. The swap meet runs from 9AM to 2PM and the seminars run from 10AM to noon. Please see the attached flyer or the calendar event.

For those who would like to vend, please email Manny Gutsche at SDIPMSExpo@gmail.com. For those who would like to participate in a seminar, please email Richard Abraham at president@ipmssd.org.
The flier can be downloaded here – swapmeet2021
Per IPMS USA –
“In light of the current pandemic situation, please be aware that neither IPMS/USA nor its Chapters are liable for any potential transmission of illnesses. Those planning to attend this event should (a) follow existing safe social distancing recommendations and (b) abide by any local or state regulations regarding gatherings.”
Happy Modeling!

Our August, 2021 meeting was held on Saturday, the 28th at 1PM at the Gillespie Field annex of the San Diego Air and Space Museum. We had lots of great models. The theme for this month was “the model with the most aftermarket parts”.

Our next meeting will be held on Saturday, September 25th at the same location at noon (the time will change for that meeting only). The theme will be “your most disappointing model”.

Nationals was held at the Rio Hotel in Las Vegas, Nevada, August 18-21.

General pictures from around the convention vendor room, contest room and seminars 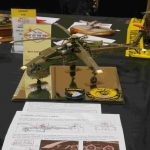