The IPMS Ireland Best Irish Subject Award represents the continuing links between IPMS San Diego and IPMS Ireland. These links were first established in 2014 when, during his trip to Ireland, Ethan Idenmill, then President of IPMS San Diego, arranged to meet with members of IPMS Ireland at the Michael Collins Barracks (part of the National Museum of Ireland). Lunch at the museum cafe and a tour of the military museum was of course paired with lively discussions of models, modelling techniques and historical commentaries. The warmth and friendship across continents driven by our common hobby (or, more accurately, “obsession”) are the basis for this award.

Since that time, each year IPMS Ireland has sponsored a Best Irish Subject Award at the San Diego Model Expo. This award is meant to raise awareness of Irish history as well as the breadth of potential Irish modelling subjects.

What qualifies for this award? An intentionally wide range of possible subjects will be considered. Of course, anything which depicts a subject of a definite Irish national character or history would qualify. For example, an Irish Hurricane fighter plane would certainly be eligible. Another example might be a figure of Brian Boru, High King of Ireland. Yet, this is not the limit of the scope of this award. There are more people of Irish ancestry living outside of Ireland than on the island itself. Consequently, models which depict Irish-American or other personages of Irish ancestry (for example, President John F. Kennedy), will also be considered, so long as the connection to Ireland is explained by the modeller on the entry sheet. Even hypothetical and science-fiction subjects, such as, for example, an Irish space-cruiser, are eligible for this award, again, so long as the connection to Ireland is explained.

In general, it will be helpful to the judges when considering entries to note the connection of the model to Ireland if that connection is not obvious.

Models eligible for this award will be judged both on the basis of modelling skill and on the connection of the subject to Ireland. The best model of those eligible will receive this award. 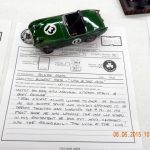