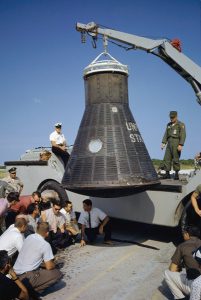 Project Mercury was the first human spaceflight program of the United States, running from 1958 through 1963. Taken over from the U. S. Air Force by the newly created civilian space agency, The National Aeronautics and Space Administration (NASA), it conducted twenty unmanned developmental flights (some using animals), and six successful manned flights. The program, which took its name from Roman Mythology, cost $277 million in 1965 US dollars, and involved the work of 2 million people. The astronauts were collectively known as the “Mercury Seven” and each spacecraft was given a name ending with a “7” by its pilot.

The Mercury spacecraft design (matured) between 1958 and 1959. After bidding by potential contractors had been completed, NASA selected the (McDonnell Aircraft Corporation, St. Louis, Missouri to construct the spacecraft). The heat shield (concept) had been developed earlier in the 1950s through experiments with ballistic missiles, which had shown a blunt profile would create a shock wave that would (dissipate) most of the heat around the spacecraft. To further protect against heat, either a heat sink or an ablative material, could be added to the shield. The heat sink would (absorb the) heat inside the shock wave, whereas the ablative heat shield would remove heat by a controlled evaporation of the ablative material. After unmanned tests, the latter was chosen for manned flights. The heat shield and the stability of the spacecraft were tested in wind tunnels, and later in flight. The launch escape system (and the) development of the landing parachutes were developed through (ground testing and) unmanned flights.

The spacecraft were produced at McDonnell Aircraft in clean rooms and tested in vacuum chambers at the McDonnell plant. The spacecraft had close to 600 subcontractors, such as Garrett AiResearch, which built the spacecraft’s environmental control system. Final quality control and preparations of the spacecraft were made at Hangar S at Cape Canaveral. NASA ordered 20 production spacecraft, numbered 1 through 20. Five of the 20, Nos. 10, 12, 15, 17, and 19, were not flown,

On May 5, 1961 the U.S. launched its first astronaut, Alan Shepard (in Freedom 7), on a suborbital flight. The U.S. reached its orbital goal on February 20, 1962, when John Glenn (Friendship 7) made three orbits around the Earth. When both the Soviet Vostok and American Mercury projects had ended by June of 1963, both countries had each sent six people into space, with the Soviets greatly leading the U.S. in total orbital time (391h-45m vs. 65h-30m).

Revell released the first issue of the 1:48 scale Mercury: America’s First Manned Satellite and Gemini: America’s Two-man Space Capsule set (H-1834) in 1964 and the kit has been re-released by both Revell and Monogram several times since then. The original release included the escape tower for the Mercury model and parts to display the Gemini on skids as there was a plan to land the later Gemini missions with the Rogallo paraglider. However, I decided to build two on-orbit versions of the Mercury program, both Freedom 7 and Friendship 7. I acquired two of the Monogram “Young Astronauts” kits which were a re-released version of the Revell kit in 1987. The molds were showing their age by this time and there was plenty of flash and heavily mismatched molding seems in both kits. Even though the original release of the kit was right after the Mercury program ended, there are several inaccuracies exhibited in both the Mercury and Gemini spacecraft so the RealSpace Models Mercury Update Sets were used to make both of these models.

I started with the interiors and only did a minimum amount of work, as I wasn’t going to have open hatches. The only Revell/Monogram kit parts I ended up using were the heat shield and its retro package, the posigrade rockets, interior rear bulkhead and the astronaut figure. The RealSpace Update Set includes re-worked exterior shingles around the pressure vessel and resized parachute and antenna compartments. The resin went together well with the only fiddly parts being the de-stabilizing flap on the front of the antenna canister. On my copies the flap hinges were incompletely molded so I replaced them with scratch-built ones. I also added a couple of extra supports to the bi-cone antenna “window areas” on the Freedom 7 antenna canister. I didn’t like the kit retro straps included in the kit so I scratch-built six straps and their related cables/accessories. I also added the exposed wires on the outside of the retro packs.

A mix Testors Gloss Black and a little Ford Engine Blue was used to get the tint I wanted for the outer surface of the shingles on the spacecrafts. Floquil Reefer White worked well for the bi-cone antenna “windows” on the antenna canisters. The Freedom 7 heat shield and retro pack were painted with Testors Metalizer Magnesium and dull coated with Testors Acryl Flat, while the heat shield for Friendship 7 was a mix of Testors Leather and Insignia Red, about 5 to 1 leather to red. New Ware Models out of the Czech Republic supplied the decal sheet. These are tiny models in 1/48 scale so they don’t take up much display space!